Hitler remains an enigma in spite of everything that has been written about him. Historians like Alan Bullock, Ian Kershaw and H.R. Trevor-Roper confess their perplexity openly. How was it possible that an unknown, solitary and future-less front-soldier in 1918 became, some years later, the Leader and Messiah of the German people? How could a nullity unleash the most destructive and deadliest war humanity has ever known? Academic historians give countless reasons because the essential reason keeps escaping them; fantasy writers find the most bizarre occult explanations, disregarding the historical facts. Georges Van Vrekhem has studied the literature in German, English, French, Dutch and Italian for several years. His conclusion is clear: in Hitler there must have been a cause equivalent to the effects of his actions. Van Vrekhem gives a revealing picture of the rise of the unknown Austrian corporal and brings to life the people who helped him in the saddle: Dietrich Eckart, Captain Mayr, General von Mohl, and many others. The author analyses Mein Kampf, the book in which Hitler laid bare his thoughts and intentions without being believed. And he shows how this "man from nowhere", driven by the obsession of his mission and helped by incredible luck, managed to become the Führer. 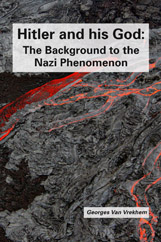 To explain the foundations of a people who made Hitler possible, Van Vrekhem undertakes, in the book's second part, a deep-probing analysis of the historical background. In this he gives a surprisingly clear picture of the German ambition, the racism which supported it, and the romantic youth movements which incorporated the racism. In a memorable chapter he sketches the history of the German Jews. And he shows another side of the German people: their longing for a better world, although vitiated by their sense of superiority. All this brings Georges Van Vrekhem to his central theme: Hitler's possession by the "god" who inspired him, guided him, brought him to power - and dropped him when no longer needed.

This leads the author, in the third part of the book, to the unexpected but well-documented role of the Indian philosopher and sage Sri Aurobindo in the action against Hitler before and during the Second World War. While Hitler wanted to bring humanity back to a state of barbarism, Sri Aurobindo stood for the progress of humanity and a future in which a new evolutionary being, beyond humanity, might at last create the world humanity has never ceased to long for. In this view of history, many worlds interact and all facts fit into the big picture.